Father of new sensation and Barcelona youngster Ansu Fati, Bori Fati, has expressed that his son’s dream is to play for Portugal national team.

After announcing himself to the biggest stage with goals in first team football, the 16-year old Barcelona star has received his Spanish passport and is now eligible to play for Spanish Under-17. 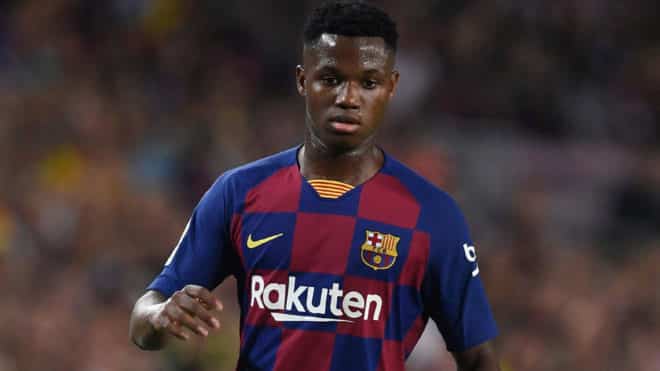 However, his father claimed that Fati, who is eligible to represent Portugal too, dreams of playing for the nation of Cristiano Ronaldo. But the father of Barcelona star admitted that now it will be difficult to change scenario.

“My dream was to see my son playing with Portugal and I think that was his dream too, but now it is difficult,” said Bori Fati in an interview with AS.

In the conversation with Spanish outlet, he revealed that he was in contact with a director of Portuguese federation for some time but nothing happened. On the other hand, Spanish football federation president Luis Rabiales contacted him immediately following the 16-year old’s display in Barcelona shirt.

Some time ago, I spoke with a director from the Portuguese federation. The conversation was positive and we agreed to speak the next day. But that person has not called me again. Then, after these matches he has played [for Barcelona], the pressure from Spain has been very strong and I have been contacted directly by the president of the Spanish Federation (Luis Rubiales).”

Ansu Fati’s father: “My dream was to see my son playing with Portugal it was his dream too, but now it’s difficult. He feels Portuguese & I do too. Everything is in the hands of Ansu. I know he would like to play with Portugal. When he is home, he always has a Portugal shirt on.”

Even though the youngster received Spanish passport, but his father believes that his son will find comfort in playing for Portugal as both of them like this idea more.

“He feels Portuguese and I do too. It would be easy for him to play with Portugal, it would have been enough for Umaro Embaló, a Benfica player, to convince him. He is a great friend, he speaks with Ansu every day.”

In the meanwhile, Barcelona are yet to register an away win in league this season, who lost to Granada last night.