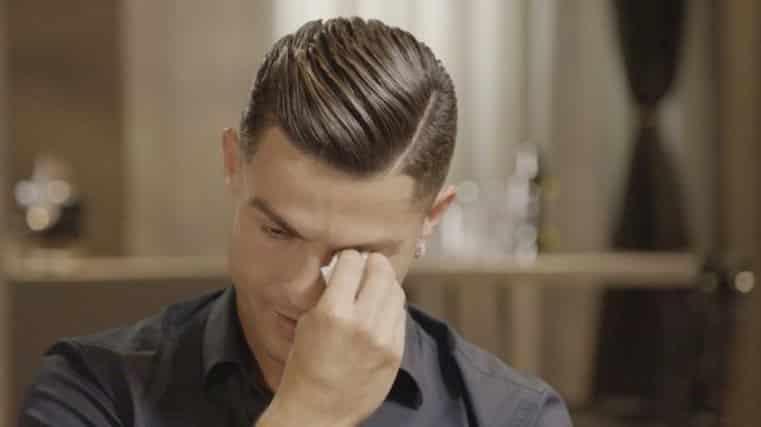 Portuguese international and Juventus forward Cristiano Ronaldo has given an emotional interview to Piers Morgan in which the Ballon d’Or winner broke down in tears talking about his father.

Former Manchester United star met Piers Morgan for an interview in which the two talked about quite a lot of stuff but the clip of Ronaldo’s father which he saw for first time, reduced the Juventus star into tears.

The interview is about to be shown on ITV on Tuesday. However, a clip where the European champion came to tears is surfing all over the internet.

During the interview, Ronaldo was shown a short video of his late father Jose Dinis Aveiro standing on the doorstep and talking about his son.

To everyone’s surprise Ronaldo never watched the clip. With a shocking but emotional nostalgia, the Juventus star signing said wiping his years from the eyes, “I never saw the video. I never saw that video. Unbelievable.”

“I think the interview would be funny, but I didn’t expect to cry. But I never saw these images. I don’t know where you. I have to have these images to show my family.”

Ronaldo’s father died at 52 due to liver failure when Ronaldo was only 20 years old, meaning he never got to see the prime years of his child. He never got to see his son playing in his peak, winning 5 Ballon d’Or and Champions League and leading his national side to European Championship and UEFA Nations league.

The former Real Madrid star continued: “I really don’t know my father 100 per cent. He was a drunk person. I never spoke with him, like a normal conversation. It was hard.”

“My family see, my mum, my brothers, even my old son, but my father, he didn’t see nothing, and it was, he died young.”