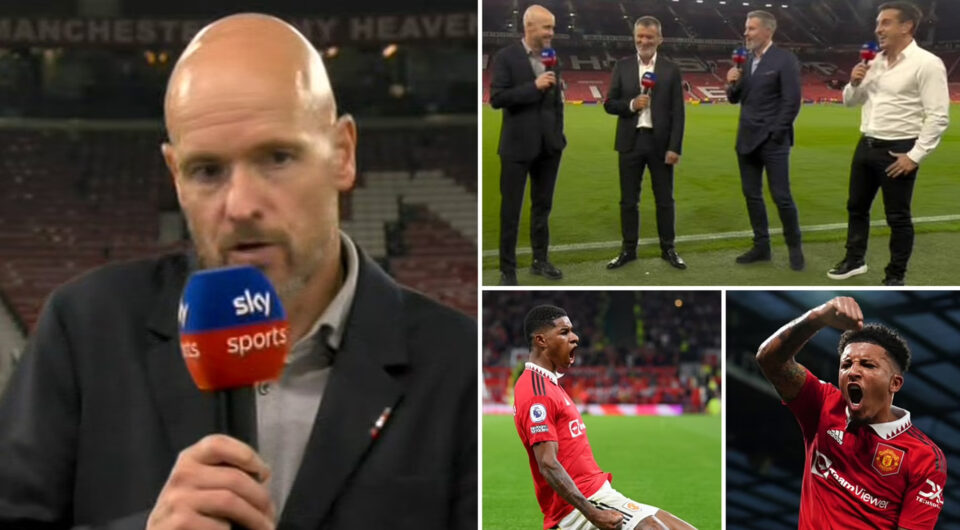 The Manchester United manager needed a response from his players after humbling defeats to Brighton and Brentford in their opening two fixtures – and he certainly got it.

Liverpool were the visitors to Old Trafford and they were beaten 2-1 by their northern rivals.

Goals from Jadon Sancho and Marcus Rashford secured the priceless victory for the Red Devils, one which could kickstart their 2022/23 campaign.

Mohamed Salah‘s late goal made things a tad nervy for United, but Ten Hag’s side managed to hold on.

It was quite the evening at the Theatre of Dreams and new signing Casemiro must’ve enjoyed what he saw while sat in the stands after being officially unveiled on the pitch before the game.

Ten Hag was evidently buzzing with the result in his post-match interview, so much so that he swore live on air.

The United boss said while discussing his team’s performance: “They can play f***ing good football!”

Don’t worry, Erik, it happens to the best of us!

After his little slip up on the microphone, Ten Hag gave a brilliant interview in which he praised the likes of Bruno Fernandes, Raphael Varane, Scott McTominay and Christian Eriksen.

He said: “We have to be a team, in good spirits and that is what we saw today. I told them we have to act, not talk a lot. We have to battle, be brave.”

When asked about Fernandes, Ten Hag added: “He [Bruno] showed leadership, along with Varane. Not just them two, we need more leaders.

“Tactically, you see where you can have weapons in the game. You see we have speed then Fernandes and Eriksen have a pass. Scott McTominay had a magnificent game.”

On the absence of Harry Maguire and Cristiano Ronaldo from the starting XI, Ten Hag calmly said: “I don’t have to mention Harry Maguire, Ronaldo, they will play a role in the future.”

Up next for United and their new manager is a trip to Southampton in Saturday’s early kick-off, a game they will really fancy their chances of winning after their unexpected success against Liverpool.