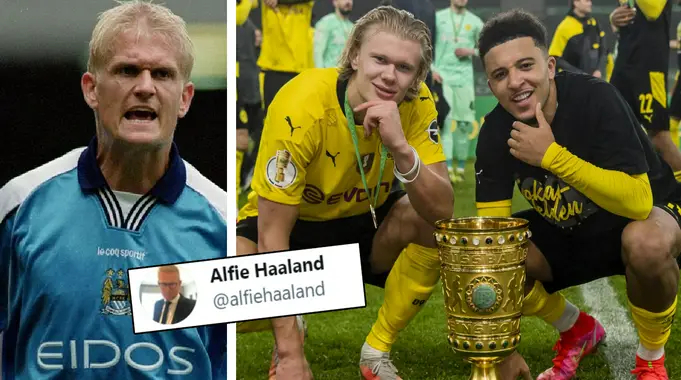 Alf-Inge Haaland, who is known famously in the red side of Manchester for an infamous tackle from Roy Keane, was disappointed to hear that Jadon Sancho is joining a rival club.

News broke on Wednesday evening that Manchester United and Borussia Dortmund had reached an agreement over the €90m transfer of Sancho, sparking reactions from supporters and spectators.

They will have to wait until Euro 2020 draws to a close to carry out the medical, nevertheless, as Sancho is currently on international duty with England. Sancho is set to sign a five-year contract after undergoing a medical. An official announcement is expected later this week.

Fuck. ? But all the best @Sanchooo10 You will be missed.

Reacting to Fabrizio Romano’s ‘here we go’ tweet, Erling Haaland’s father wrote: “F***. But all the best Sancho, you will be missed.”

However, one of the longest transfer sagas in recent memory appears to be edging towards its conclusion, with Sancho on the verge of leaving Dortmund.

And that comes as a bitter disappointment for Haaland’s dad, who is unhappy at the thought of his son playing without the England winger at Signal Iduna Park next season.