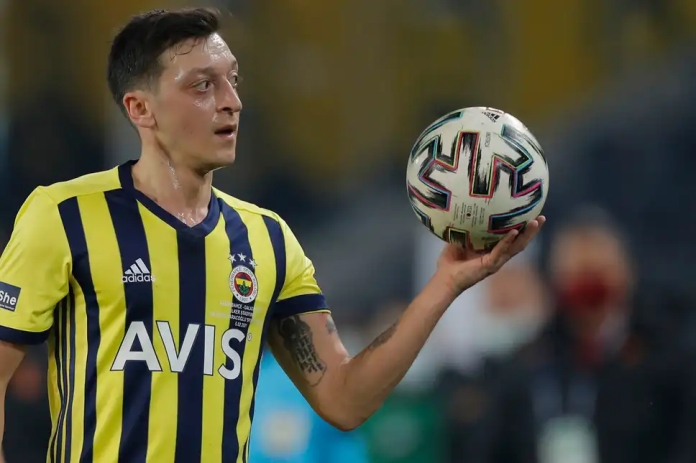 Mesut Ozil broke his silence on Friday afternoon, 24 hours after Fenerbahce had suspended him. The Turkish club has suspended the former Arsenal player after a verbal fight with temporary boss Ismail Kartal.

“The main thing is Fenerbahce,” the former Germany international, 33, captioned a photo of a Turkish and Fenerbahce flag on Twitter.

During Fenerbahce’s 2-1 home victory against Super Lig rivals Konyaspor on Sunday, Ozil is thought to have had a spat with Kartal. Ozan Tufan, who spent the first half of the season on loan at Premier League side Watford, has also been suspended.

“Our ‘Football A Team’ players Mesut Ozil and Ozan Tufan have been excluded from the squad as per the decision taken,” read a statement from the Turkish outfit, published on social media. “It is announced to the public.”

Ozil and Tufan will not be eligible for selection or even train with Fenerbahce’s first team until further notice. According to football.london, the World Cup winner will be forced to find a new club in the summer if the situation can’t be resolved soon.

After his contract with Arsenal was mutually cancelled in January 2021, Ozil joined Fenerbahce. He’s had a strong season, scoring nine goals and adding two assists across all competitions, but he was chastised by club president Ali Koc last season.

“Since the start of this season, Mesut Ozil has been compared to Robin van Persie,” said Koc. “Ozil wants to play more. From now on, he needs to focus on his game and keep his commercial interests out of it. He needs to think about contributing to Fenerbahce.

“Our coach also needs to try to figure out how to get the most out of Ozil. There is not a problem, despite what the media says. Mesut is unhappy because he does not play regularly.”

Kartal, who won Fenerbache’s most recent trophy during his first spell in charge in 2015, returned to the hot seat at the beginning of this calendar year following the departure of Vitor Pereira. The Portuguese coach was recently linked with the Everton job.

Ozil still has 27 months remaining on his existing deal and is reportedly earning £3.5million-a-year at Fenerbache. The Turkish outfit recently denied Ozil had gone on strike due to unpaid wages, with the club reportedly £300m in debt.

“The news that Mesut Ozil did not play because his debts from the club were not paid have nothing to do with the facts,” read a statement. “As we have often experienced, this kind of fake news that is created completely haphazardly without being confirmed by any official from our club is beyond our tolerance limit… payments have been made on time until now.”

Mikel Arteta had a difficult time ending Ozil’s Arsenal career. Despite being the highest paid player at the Emirates, he did not play over the final ten months. After signing a lucrative contract with Arsenal in January 2018, Ozil was said to be earning £350,000 a week.