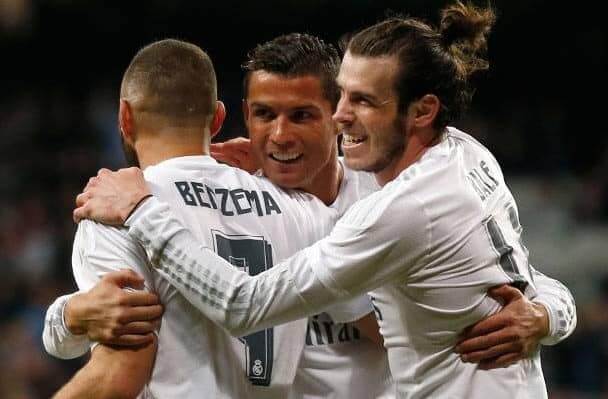 Real Madrid’s star striker, Karim Benzema, believes that he was the player that made Real’s famous trio ‘BBC’ work.

‘BBC’ was the Los Blancos attacking trio formed by Benzema, Gareth Bale and Cristiano Ronaldo. The trio was pivotal to Real Madrid’s success in Europe from 2013-2018, and their own reply to Barcelona’s ‘MSN’ consisting of Messi, Suarez and Neymar.

The BBC came into being after Gareth Bale’s record signing in 2013 and was disbanded when Cristiano Ronaldo departed in 2018. During that time, the trio combined for 442 goals across all competitions, with Cristiano amounting for 249 of them alone.

And now a year after the trio was disbanded, Karim Benzema has revealed the particular roles that each of the three players played for the club.

“You had a rocket (Bale) and a goalscorer (Ronaldo), and then there was me, the piece that made it all work,” he spoke to RMC Sport.

Karim Benzema was once the main attacking force for French club Lyon, before he moved to the Santiago Bernabeu in 2009. However, after moving, Benzema adapted to his role perfectly at the Spanish capital.

“Here, the finisher was Cristiano,” the Frenchman added.

“I played a different role. I was involved more in the construction of moves and trying to open up spaces.

“For me, he was the best goalscorer even if he played on the left. I moved away to open up space and let him score.”

Following Cristiano Ronaldo’s departure to Juventus in 2018, the burden of being the goalscorer now lies with Karim Benzema, who racked up 30 goals last season. The Frenchman already has two goals in three league games so far and is looking to help Real Madrid regain their form in Zidane’s second tenure as manager.

The Attacker Real Madrid Should Not Think Twice About Buying

Liverpool refusing to negotiate with Real Madrid over £72m fan-favourite