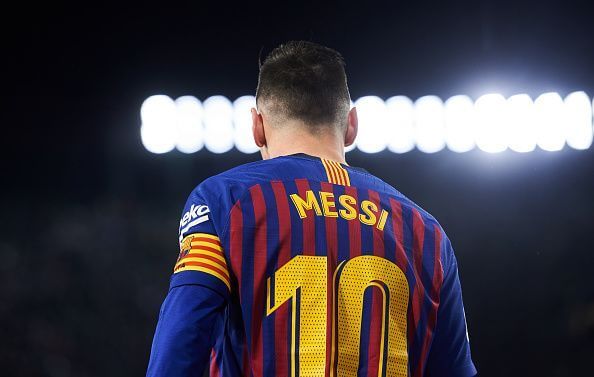 Barcelona midfielder, Sergio Busquets, believes that teammate, Lionel Messi, has an edge over Juventus star, Cristiano Ronaldo, adding that the Argentine has been gifted with all round play.

Both Messi and Ronaldo have taken the game of Football to a new level and the consistency over the last decade has put the two stars above the rest. As a result of which, both the players have been put in the long-standing debate of who’s the “greatest of all time”. Recently, the Spaniard was asked to pick a side, who thinks Messi is more complete than his nemesis, the Portuguese captain.

The Spanish midfielder also thinks having the best player in the side does not guarantee any success in Europe for the Catalan giants.

The Spanish giants are drawn against English side, Manchester United, in the Quarter-finals of the UEFA Champions League. The La Liga giants, led by Messi’s two goals and two assists, beat Lyon 5-1 at Nou Camp, confirming their place in the Last-8.

Barcelona have been poor in the European competition in the last three years and will be looking to revive their reputation this term. With Real Madrid already out of the Champions League, Barcelona could have a fair chance at the European glory.

However, the Catalan giants will face a promising Manchester United side, who were able to overturn a two-goal deficit against Ligue 1 leaders Paris Saint-Germain to make it to the quarter-finals.

In an interview with El Mundo, the Spaniard said,

“For me Leo is the best, he is much more complete [than Cristiano Ronaldo], participates more in the game, does things that nobody does. But Cristiano is a great player and we can see what he is capable of at the goalscorers level. Maybe he does not have as much quality or as much at stake, but at the level of ambition, goalscorer, winner, Cristiano is one of the best.”