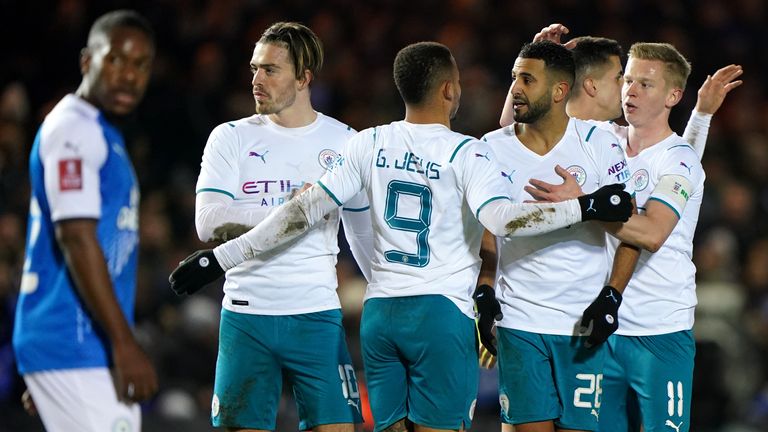 Pep Guardiola will make changes to his Manchester City lineup when Manchester United visits the Etihad Stadium on Sunday, but fans may expect some familiar faces to start.

Guardiola enjoys a team sheet surprise, and if the manager sees a tactical advantage in changing his approach in a match that has favoured the away team in prior meetings, it will be no different on Sunday.

Man City may be forced to make at least two changes against United due to injury concerns for Nathan Ake and Ruben Dias, while Kyle Walker’s return from suspension in the FA Cup this week may demand another defensive choice.

Guardiola’s selections may have already hinted at six players who will be assured of starting against United if City’s FA Cup triumph at Peterborough is taken into account.

With Zack Steffen still injured, Ederson is almost certain to start against United as the club’s number one goalkeeper. Steffen’s ailment forced him to play in the cup, when he would normally be rested, but the clean sheet against Peterborough will give him confidence heading into the derby.

Dias would ordinarily be the favourite to start, but he is doubtful, therefore Joao Cancelo is the only defender who is expected to play. Cancelo has been an ever-present this season, ahead of Walker on the right and Aleks Zinchenko on the left, after a fantastic performance in the Old Trafford triumph. Cancelo will almost certainly be included in Guardiola’s full-back lineup.

The midfield trio is likewise set, though the further forward Guardiola goes, the more tempted he may be to tinker in order to find space versus United.

Rodri and Kevin De Bruyne were both rested against Peterborough, but both play important roles in the squad, so it’s a fair assumption that they’ll start on Sunday after a game-free week.

Bernardo Silva, who was on the bench for the cup match, was another player who excelled at Old Trafford in the reverse matchup. He may play alongside De Bruyne in midfield, or, as Guardiola suggested earlier this week, he might play farther forward as a false nine or on the wing to make room for Ilkay Gundogan in the midfield.

Finally, Raheem Sterling sat out the Peterborough game, allowing him to return to the starting lineup on the wing with fresh legs following his recent good form.

Guardiola has the option of recalling individuals who did not play in the derby for the Champions League last-16 second leg next week, giving him more leeway versus United.

Of course, he might choose to rest some of the players that were rested on Tuesday in order to capitalise on the momentum gained by Foden and Grealish.

However, the fact that so many key players were given a night off in the cup points to their involvement in the derby, with others simply undroppable.