Fc Porto winger has been extensively connected with Liverpool, and we recently covered a report claiming that the Reds are close to signing him.

However, recent rumours in the media say that Manchester United is serious about signing the Colombian international from FC Porto and are willing to spend a high price to do so.

Man United are eager to open their wallet and splash the cash to hire the 24-year-old winger, according to A Bola (press image below).

According to a well-known Portuguese news source, the Primeira Liga club would like to preserve their prized asset until the conclusion of the season, but they will be unable to do so if the £67 million release clause is satisfied.

Diaz scored a goal and assisted on another two days ago to help his club earn all three points after falling down 2-0 to Estoril. So far, the South American left-winger has started 23 games in all competitions and has contributed directly to 21 goals (15 goals and 6 assists).

He helped Colombia finish third in the Copa America last summer by scoring four goals in as many starts. He was tied for the tournament’s best scorer with Lionel Messi, the Player of the Tournament.

In the current squad, Man Utd have stars like Sancho, Rashford, Martial, Lingard and even Ronaldo, who can play on the left flank. Therefore, I do not think that we need to add another left-winger in the form of Luis Diaz.

In your opinion, who should the Red Devils sign to reinforce the squad in this winter transfer window? 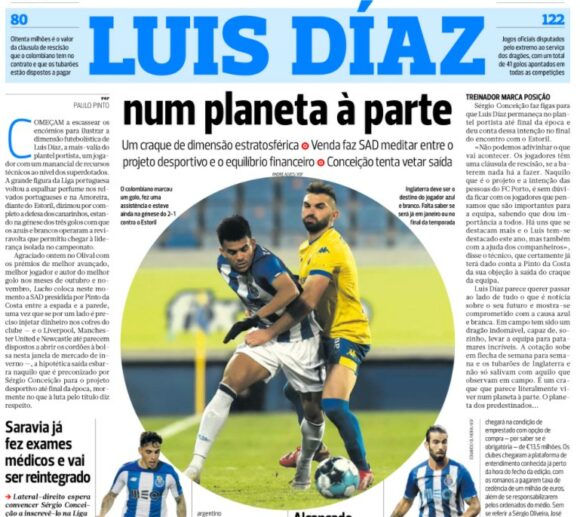