The Red Devils overcame Tottenham Hotspur 3-2 in a thrilling match on Saturday, thanks to a spectacular Cristiano Ronaldo hatrick. The home audience created a magical environment, and their celebrity has requested an encore.

Despite United’s troubles this season, Atletico Madrid has struggled this season and will not approach the game as favourites. In a season in which both Real Madrid and, particularly, Barcelona have faltered, Diego Simeone has unable to rouse his club to make a genuine La Liga title challenge.

Luke Shaw, Scott McTominay and Bruno Fernandes have all returned to training providing a timely boost for the manager.

But there are question marks over the left-back’s involvement and the team management might not want to rush him back.

David de Gea conceded twice against Spurs but will be desperate to keep a clean sheet against his former club tonight.

Diogo Dalot seems to have done enough to keep Aaron Wan-Bissaka out of the Man United lineup. And after the failed Victor Lindelof experiment at right-back in the first leg, it is unlikely we will see such decisions this time around.

United have yet to lose a game with both Harry Maguire and Raphael Varane on the pitch. The duo is likely to be positioned as the centre-back pairing in the Man United lineup.

Luke Shaw is unlikely to be rushed straight back which means the decent Alex Telles should continue at left-back.

Nemanja Matic has given a good account of himself in recent weeks and given his introduction in the first-leg benefited United immensely, we are sure to see him anchor the midfield later today.

Fred was excellent against Spurs and his high-energy approach and commitment could overpower a ball-shy Atletico Madrid midfield.

Bruno Fernandes is likely to be a part of the Man United lineup as the most advanced midfielder. 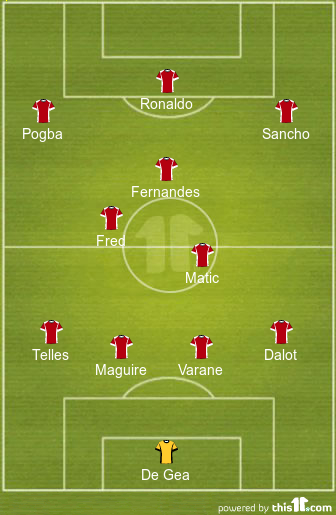 Jadon Sancho has played himself into becoming one of the first names on the team sheet. He is likely to take up the right flank in the Man United lineup.

Paul Pogba might have to do with a place on the left-wing given the lacklustre form of Marcus Rashford and the inability of Anthony Elanga to deliver over the 90 minutes. The Frenchman will do well to get into dangerous areas in the final third of the pitch and influence the game.

And the undisputed candidate to lead the line is Cristiano Ronaldo who roared back to form with a fine hattrick. The Spanish club are one of his favourite opposition and the Portuguese will be eager to dominate them again.