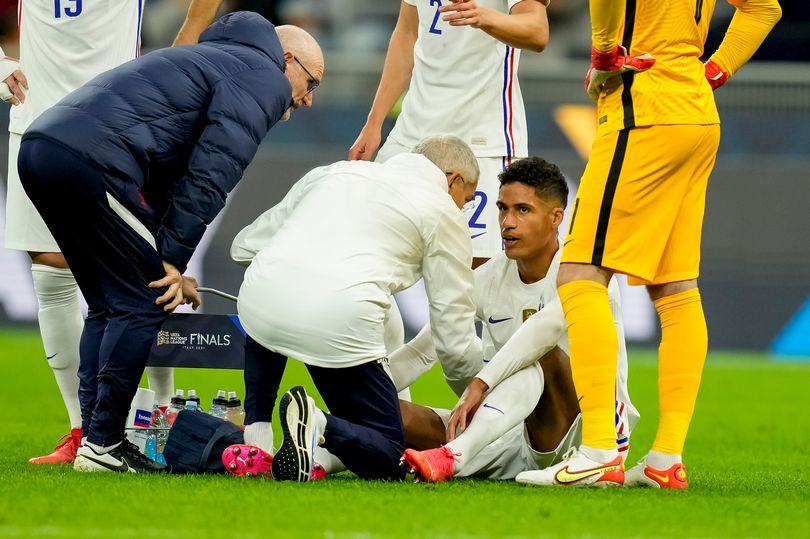 According to a medical and performance specialist, Raphael Varane has most certainly sustained an adductor injury.

The French international was substituted in the first half of France’s UEFA Nations League Final against Spain on Sunday evening.

Varane collapsed holding his leg, although it is unclear if he felt it after tripping over a muscle while jogging or as he attempted to cut off a Spain cross.

The seriousness of the Manchester United defender’s injury is presently unknown, with the France international leaving in the 43rd minute and unable to wait until halftime.

Varane was treated to on the pitch by French medical personnel, but it immediately became clear that he would not be able to continue.

And, in the aftermath of the injury, Dr. Rajpal Brar, a physical therapist, fitness and mobility coach, has provided his opinion on what the injury may have been based on Varane’s movements during the game and after he was taken off.

“His return timeline will depend on the specific location, and severity of the injury.

“If it’s indeed an adductor tear, a grade one typically comes with a one to two-week return timeline, grade two you’re looking at two-and-a-half to three weeks, and then a grade three is going to be dependent on if surgery is required or not.

“Although I highly, highly doubt it’s a grade three based on the fact he was able to walk off pretty well and was allowed to be on the bench, as well.

“We’ll certainly find out more, as it’s evaluated by the national team and also by Man United staff as well, but these can be tricky injuries to deal with and quite sensitive to re-injury because of the significant demands placed on the adductors during football.”