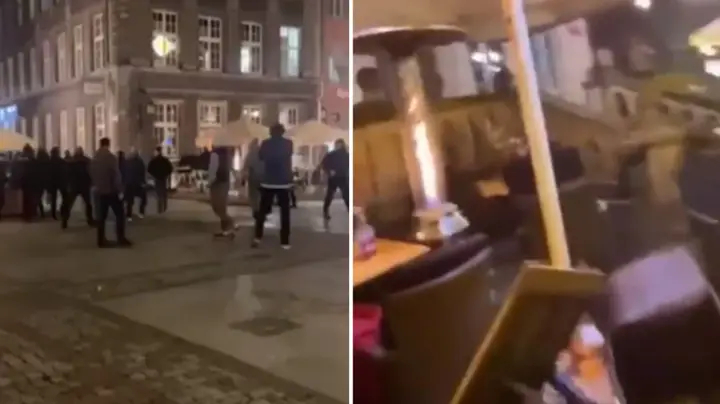 SEVERAL Manchester United fans were reportedly injured last night following an attack by locals in Poland ahead of the Europa League Final.

The Red Devils are in Gdansk to take on Villarreal this evening as Ole Gunnar Solskjaer looks to land his first piece of silverware as manager.

A lively start to the evening in Gdansk pic.twitter.com/9IctJ6Ff6e

Around 2,000 supporters have travelled to Poland for tonight’s big game against Villarreal but many in a bar in the city’s main square were targeted by locals in an unprovoked attack on Tuesday night.

A number of fans, including United and England legend Wayne Rooney, have flown over to watch the action live. However, three supporters suffered minor injuries after they were attacked in a bar yesterday.

A United statement confirmed: “Club staff were assisting a number of United fans in Gdansk last night and today after an incident where some of our supporters were attacked outside a bar in the city.”

BBC reporter Simon Stone says the trouble was not between rival fans and the mood between the two sets of supporters is ‘good natured’.

Three @ManUtd fans suffered minor injuries after locals attacked them in a bar last night. Club staff assisting those who had stuff stolen. Not aware of any issue involving Utd/Villarreal fans and general atmosphere good natured.

The trouble occurred outside a bar in the Polish city as chairs were smashed while bottles and glasses were also thrown.

A clip has surfaced on social media that shows a group of what appear to be locals, dressed in dark clothes, chanting and running from a bar in the city.

United issued a statement on the trouble, saying: “Club staff were assisting a number of United fans in Gdansk last night [Tuesday] and today after an incident where some of our supporters were attacked outside a bar.”

Footage doing the rounds on social media showed a group wearing black running and chanting outside a bar, while tables were overturned, and chairs, bottles and glasses were smashed.

Big Boost For Chelsea As £55M Star Wants To Join Them