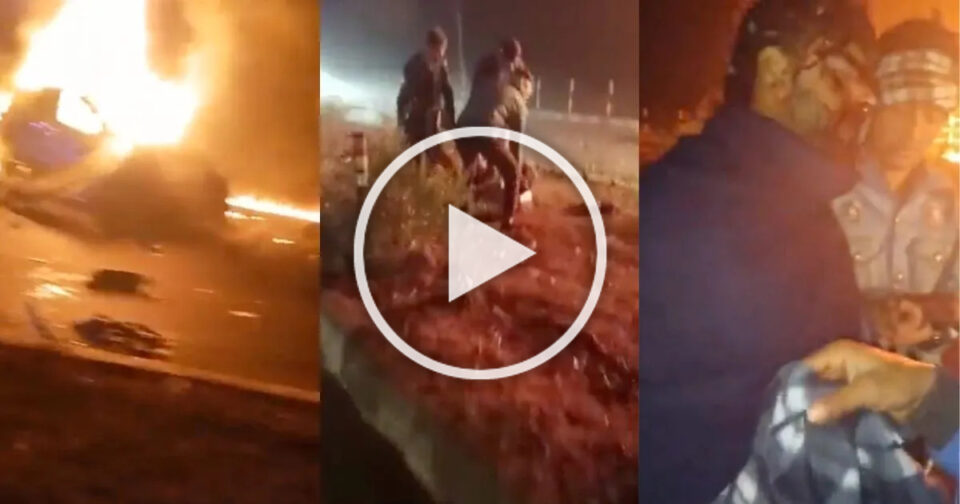 Rishabh Pant, the wicket-keeper for India, was hurt in a car collision on Friday near Hammadpur Jhal, not far from Roorkee’s Narsan boundary. Despite having burn injuries, the Indian cricketer’s condition is not critical, as stated by the police.

Video shows Rishabh Pant being assisted by three men shortly after the collision on the pavement and the entirely on-fire automobile on the road is making the rounds online. Pant was injured, the amount of which is unknown, after his automobile collided with a divider and caught fire. According to reports, Pant was driving the automobile.

According to preliminary reports, he has been transported to Max Hospital in Dehradun for treatment, where he will undergo plastic surgery.

Rishabh has wounds on his forehead and left eye, as well as a ligament tear in his left knee and abrasions on his back, according to Dr. Sushil Nagar. According to X-rays, he has no fractures or burns on his body.

Watch: The vehicle is on fire, and Rishabh Pant is lying on the ground:

This video is told to be of Rishabh Pant's recent accident in Uttarakhand. Vehicle can be seen on fire and Pant is lying on the ground. @TheLallantop pic.twitter.com/mK8QbD2EIq

This video is believed to have been shot by passers-by who were present at the time. People on the street can be heard saying,

“Look here, brother, the car has caught fire, this man… he was in an accident this morning.”

Earlier, the 25-year-old was not included in the Indian ODI and T20 squads for the upcoming series against Sri Lanka.

Pant was anticipated to play a pivotal role in the series that may determine whether India can qualify for the World Test Championship final for a second consecutive year when Australia tours India for a four-Test series early in the following year.