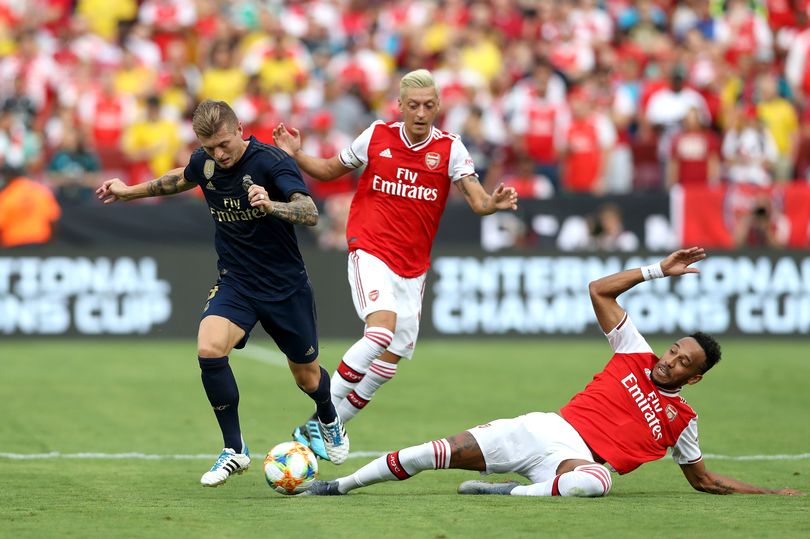 Los Blancos  midfielder Toni Kroos has delivered the latest blow in his public feud with Pierre-Emerick Aubameyang, branding reaction to his earlier remarks as ‘very amusing’.

World Cup winner hit out at Aubameyang’s superhero-themed goal celebrations earlier this month, describing them as ‘nonsense’ and ‘where it ends with me’.

“I find it very silly,” Kroos said on his podcast Einfach Mal Luppen.

“Even worse is if there are any objects hidden in their socks. Aubameyang once celebrated and took out a mask! That’s where it ends with me.

“I don’t think that’s a good role model, either. What nonsense.”

The Arsenal striker responded on Twitter before Mesut Ozil weighed in on the situation, describing Aubameyang’s Black Panther-themed effort against Rennes last year as ‘the best goal celebration’.

The new development sees Kroos saying that he considered the arsenal pair’s reaction to be funny, as well as suggesting that he had moved away from the discussion.

“I’m not surprised by anyone anymore. I found it very amusing, but in the meantime I’ve put it behind me,” he revealed to German outlet Bild when quizzed on the situation.

In his reaction to the initial comments of the 30-year-old, Aubameyang said that the reason for his distinguished style of celebration was to make his son and other young fans proud.

He tweeted: “By the way – does this Toni Kroos have kids? Just remember, I did it for my son a few times and I will do it again.

“I wish you have kids one day and make them happy like this junior school pupil. And don’t forget #maskon #staysafe.”

Arsenal will resume their Premier League campaign with a trip to Leeds United after the international break as they look to return to winning ways following the defeat to Aston Villa last time out.