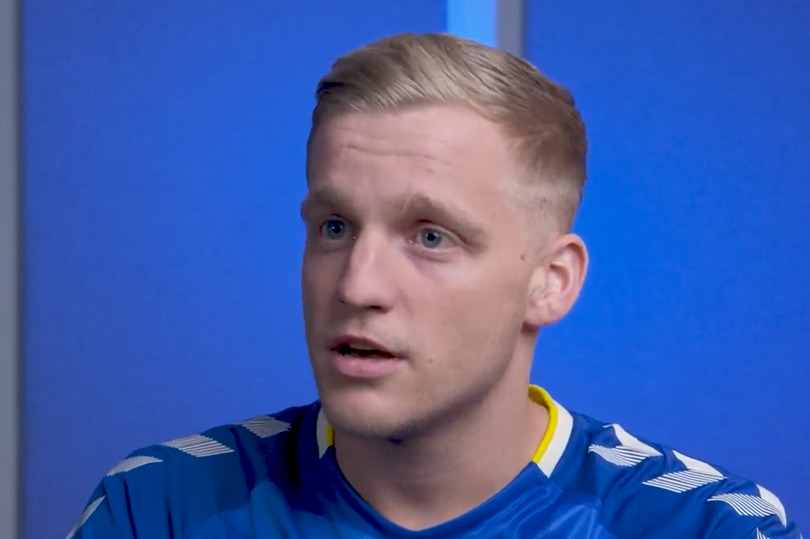 After joining Everton on loan, Donny van de Beek wants to show off his potential to ‘the people of England.’

Van de Beek, 24, joined Everton on loan from Manchester United until the end of the season on January 31.

The midfielder is Frank Lampard’s first acquisition at Goodison Park, and Everton will pay the entirety of his £120,000 per week salary. However, there is no option to make the contract permanent at the conclusion of the season, which means Van de Beek will return to United.

Van van Beek has battled for game time at Manchester United, and the transfer to Everton offers increased playing time.

The Dutchman is clearly relishing the opportunity for regular game time, as he explained to Everton upon Monday’s transfer.

“Now I can say I am an Everton player, I am really happy and can’t wait to help the team,” Van de Beek told evertontv.

“I think it is a great club. There are really good players here and I came because I want to help them go up the table.

“I hope to bring my football qualities, my passing, and, of course, scoring goals. It is a big part of my game to score and give assists and I will try to do that again. And it is not only offensive, you have to defend as a midfielder and I can do that as well.

“I had a really positive meeting with the new coach. We have the same ideas about football and he had a lot of influence on my decision. I played against him when I was at Ajax, and he was at Chelsea [as manager], so he knows me as a player.

“He thinks I have qualities that can help the team. I can learn a lot from him because he was a little bit in the same position – a midfield player who scored a lot of goals. He can help me a lot, so I think I’m in a good spot.

“I want to improve with Everton. There are always things that can be better and I work hard every day to do that.”

“I want to show my qualities, my strengths, to the people in England – but especially the fans from Everton,” Van de Beek added.

“The most important thing is we win games and go up the table. We have good players in the team and the talent and ability to go up in the league. But, for that, we need to work hard and I want to be part of this.

“I’m fit. I train a lot for myself and I was training a lot with the team at United. I have a few days to train fully and I’m sure I’ll be there [ready for Newcastle].”