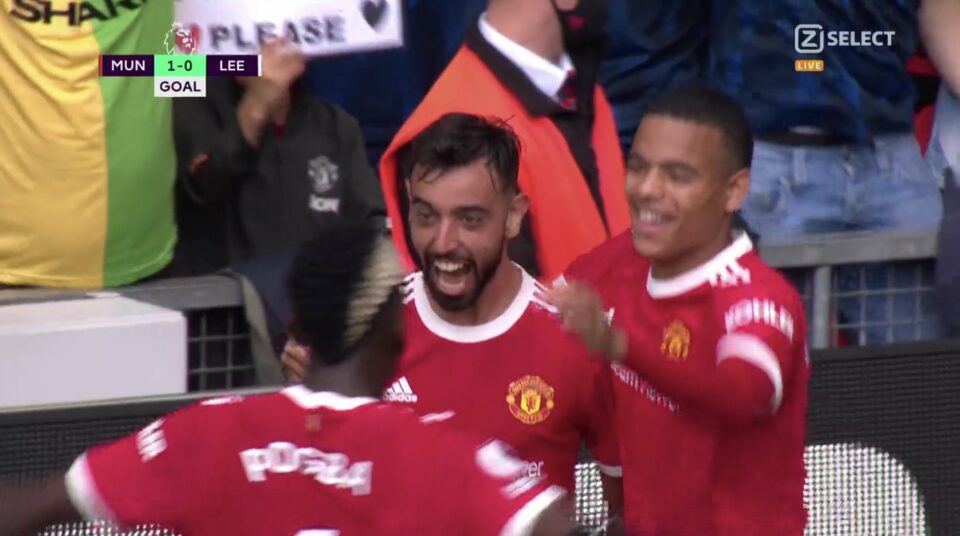 Klich sends a cross into the Manchester United penalty area from the right wing, trying to pick out Bamford. It’s a good cross but Lindelof doesn’t give the striker an inch. He forces the ball out for a goal-kick off the Leeds No9.

In the 30th minute of this afternoon’s Premier League clash between Manchester United and Leeds, Ole Gunnar Solskjaer’s side took the lead against their historic rivals.

Victor Lindelof headed the ball into an open Scott McTominay in midfield after a clearance from Illan Meslier, the United academy graduate then drilled the ball across the park to Paul Pogba.

Pogba instantly showed the mercurial ability that he possess with a wonderful first-time pass over the top, sending the ball through to Bruno Fernandes.

Fernandes controlled the ball brilliantly before taking the ball left and firing a strike at goal, the ace’s effort struck the leg of Meslier and bundled into the back of the net.

Fernandes runs on to a through ball from Paul Pogba and controls it on the edge of the penalty area. With only Meslier to beat, he shoots goalwards. The ball takes a deflection off the inside of the goalkeeper’s leg and loops up in the air before dropping into the empty goal.

Dan James is unable to run on to a weighted pass in behind from Bruno Fernandes. Illan Meslier, who signed a new five-year deal with Leeds yesterday, is quick off his line to get down, smother the ball and deny the Welshman.