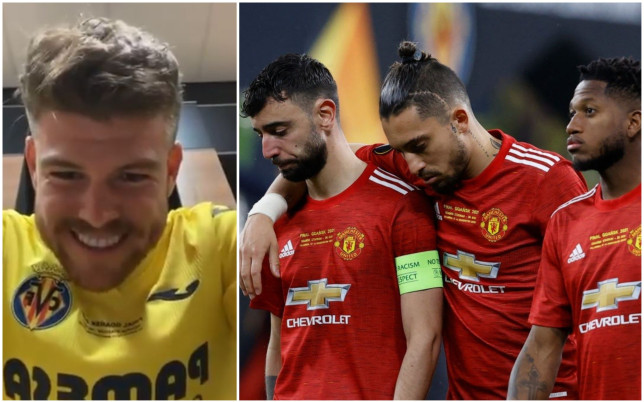 The game ended 1-1 in normal time and was settled by a tense penalty shootout, with United goalkeeper David De Gea missing the crucial spot kick.

Moreno, who spent five seasons at Liverpool before he joined Villarreal in 2019, came on as a substitute in the Europa League final and scored his penalty in the shootout.

During his post-match celebrations, Moreno was joined by plenty of Liverpool fans in his Instagram live video. And during his celebrations, the defender said: ‘For all the fans of Liverpool, vamos! Man United get out! Get out, Man United! You’ll never walk alone, siempre [always].’

Speaking before Villarreal’s final, Moreno admitted he was unhappy with the criticism he had received for his display in Liverpool’s 3-1 defeat to Sevilla in the Europa League final in 2016.

‘I still don’t understand the amount of criticism,’ he told The Guardian. ‘On the first goal they nutmegged me, sure. But I’m a defender. Players get past Sergio Ramos, the best centre-back in the world. Why can’t it happen to me?

‘To this day I don’t understand why I got so, so much criticism, when the whole team didn’t play well. The finger was pointed at one player and I don’t think that’s OK. People blame you. Only you. It was like I lost the final. It’s hard.

Alberto Moreno, you’re one of our own ❤️pic.twitter.com/CfABn0EIs4

‘Deal Confirmed’: Romano Claims Player Arsenal Were ‘A Step’ From Signing Is About To Join London Rivals