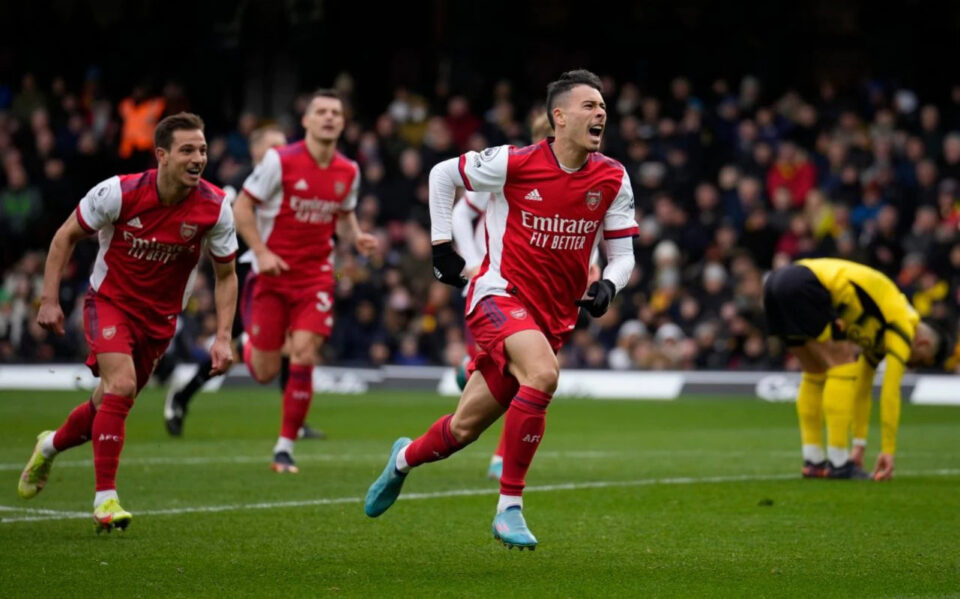 Arsenal moved into fourth place, briefly at least, on Sunday as goals from Martin Odegaard, Bukayo Saka and Gabriel Martinelli secured a 3-2 win over Watford in the Premier League.

Aaron Ramsdale (GK) – 5/10 – There were a couple of efforts for Ramsdale to deal with, many fairly comfortable, and the goal was one you just have to tip your hat to. Nearly got caught out with some poor deliveries, and was found lacking for the Hornets’ second goal.

Cedric Soares (RB) – 6/10 – Watford had little joy down the right side where some neat combination play between Cedric, Odegaard and Saka regularly got in behind the hosts. As ever, the positive moments tend to be met with a few needlessly sloppy ones.

Benjamin White (CB) – 7/10 – Cleverly positioned himself in the box throughout the game with Watford looking threatening on the break, and when the ball did get into the Arsenal penalty area it was White more than anyone cleaning up. Very tidy afternoon up until Sissoko’s goal, where he wasn’t strong enough.

Gabriel (CB) – 6/10 – Once again shakier than usual, looking nervy in possession as he was against Wolves. Gabriel did grow into the game though, composing himself and choosing the right moments to drop off and press the ball.

Kieran Tierney (LB) – 6/10 – For someone who has played left centre-back in a three many times, the adjustment to a more conservative left-back with Cedtic on the the other side has been tough for Tierney. He was getting exposed numerous times down his side at Vicarage Road and was caught napping. Another player who did grow into the game.

Martin Odegaard (AM) – 8/10 – Exceptional timing on the ball. When to hold it that split second longer and when to release first time is second nature to him. His vision in possession and work rate off it is the best this team has seen in years.

Ran the show on Sunday and added gloss to his performance was a gorgeous opening goal.

Thomas Partey (DM) – 8/10 – Elegant, physical and inventive, Partey’s role in keeping Arsenal ticking over and facilitating that in front of him was very impressive yet again.

He’s someone bursting with confidence as witnessed with the precision of his body feints and no-look touches.

Granit Xhaka (AM) – 7/10 – It was Arsenal’s left side that was a weakness for most of the afternoon, with the trio of Xhaka, Martinelli and Tierney not on the same page defensively. Xhaka was mostly a calming presence in midfield though, offering Partey an option on the ball, although the sloppiness he showed for Watford’s second was wasteful.

Bukayo Saka (RW) – 9/10 – A special talent playing at a special level. Don’t just give him a new contract, give him the missile launch codes, his own island, a stand named after him…everything.

Devastatingly aggressive with his running, the movement he showed off the ball coupled with the finishing touch in the goals was outstanding. Terrorised Watford all game.

Alexandre Lacazette (ST) – 8/10 – Was barely involved up until his delightful assist for Saka – his sixth assist in his last nine Premier League matches – but he did keep the Watford central defenders always occupied.

Lacassist King then kept it up with another for the third goal, currently boasting the third best assist p/90 record in the division, on what was an effective outing from him.

Gabriel Martinelli (LW) – 6/10 – An off day for Martinelli who couldn’t find any rhythm with Tierney down the left either defensively or in the attacking third then turned on its head with a divine third goal, one his performance needed. He was looking frustrated.